The FinHealth Score is based upon the following definition of financial health:

Financial health comes about when your daily financial systems allow you to be resilient and pursue opportunities over time.

Financial health is a composite framework that considers the totality of an individual’s financial life. Unlike narrow metrics like credit scores, financial health considers whether individuals are spending, saving, borrowing, and planning in a way that will either contribute to, or detract from, their resilience in the face of unexpected events and ability to thrive in the long term. 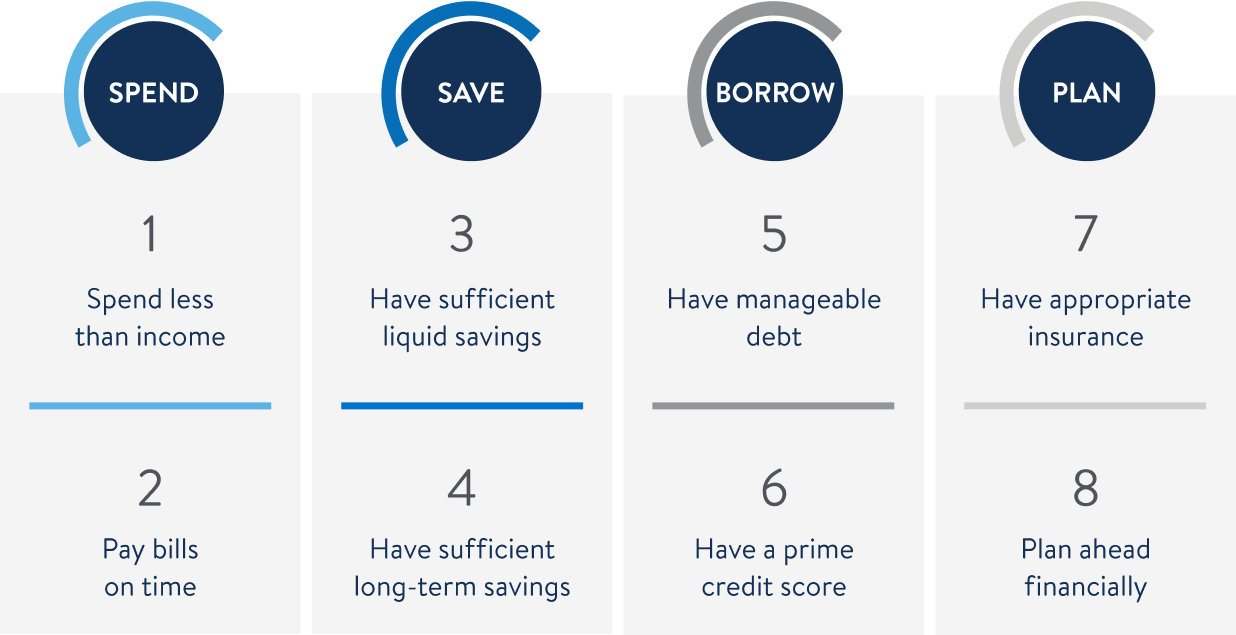 Overview of the Framework

The FinHealth Score is based upon the theoretical framework presented above. For every individual who responds to eight survey questions that align with the eight indicators of financial health, one FinHealth Score and four sub-scores can be calculated.

The figure below shows point values for each of the possible responses for the survey questions that align with the eight indicators of financial health. 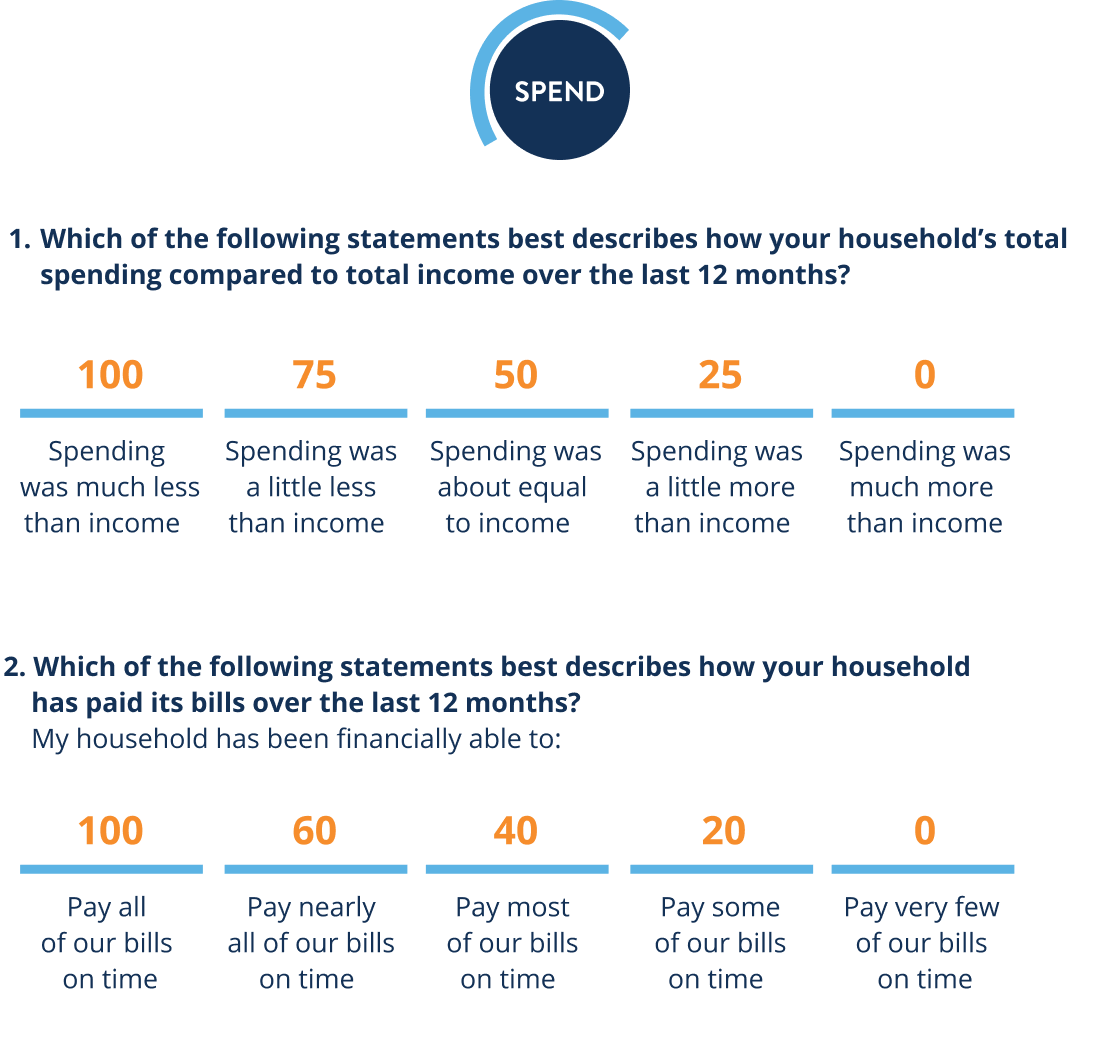 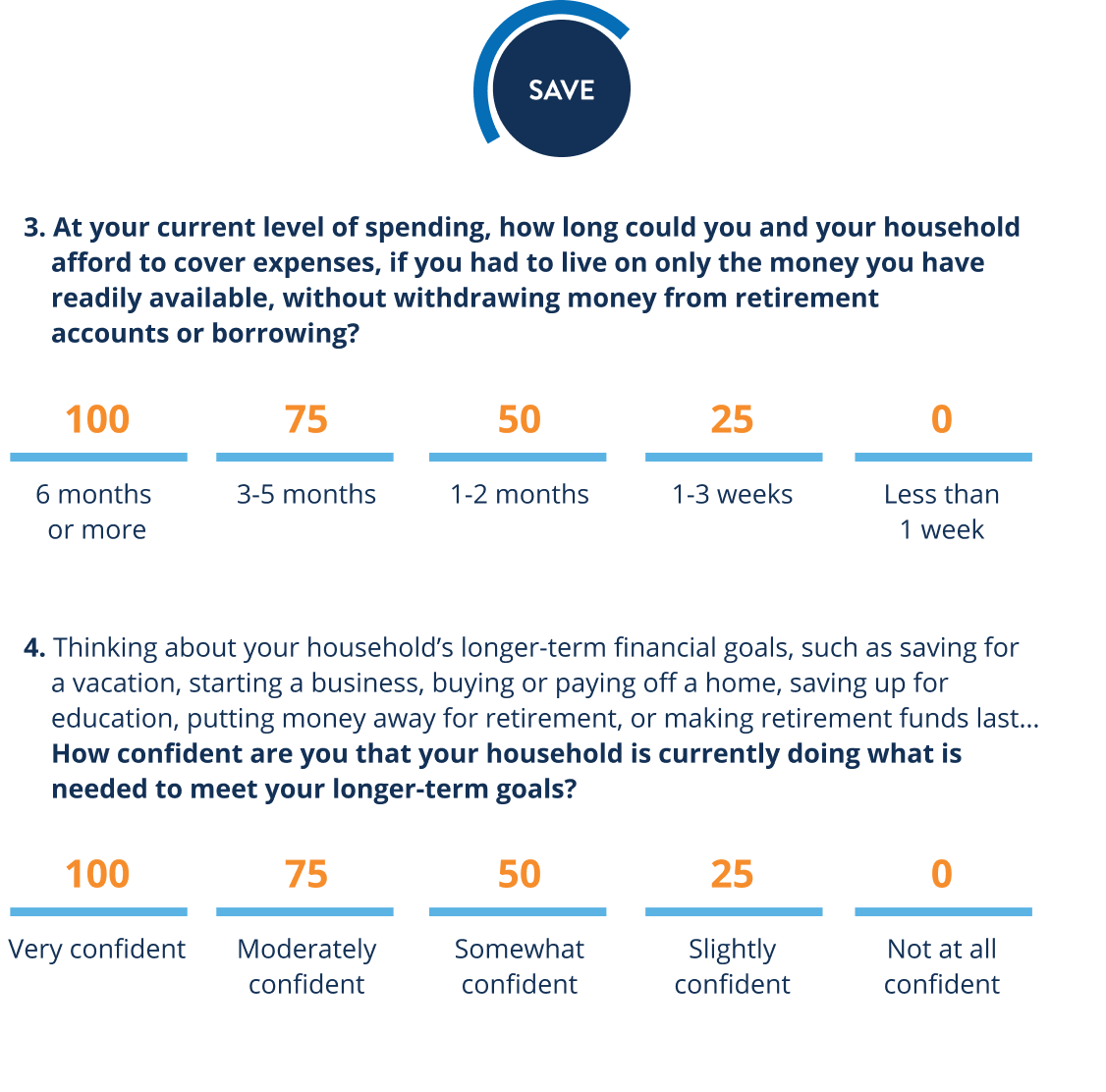 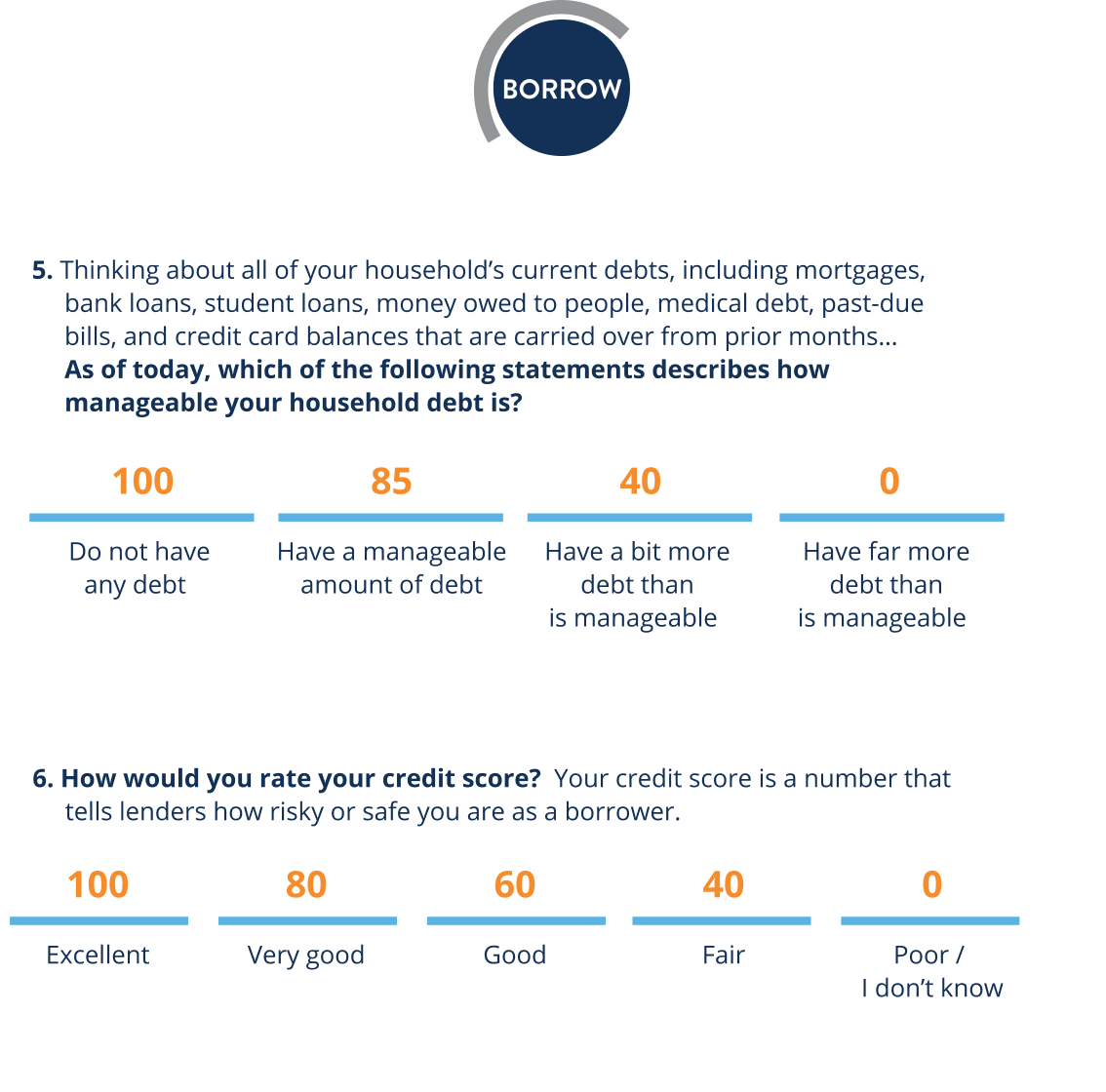 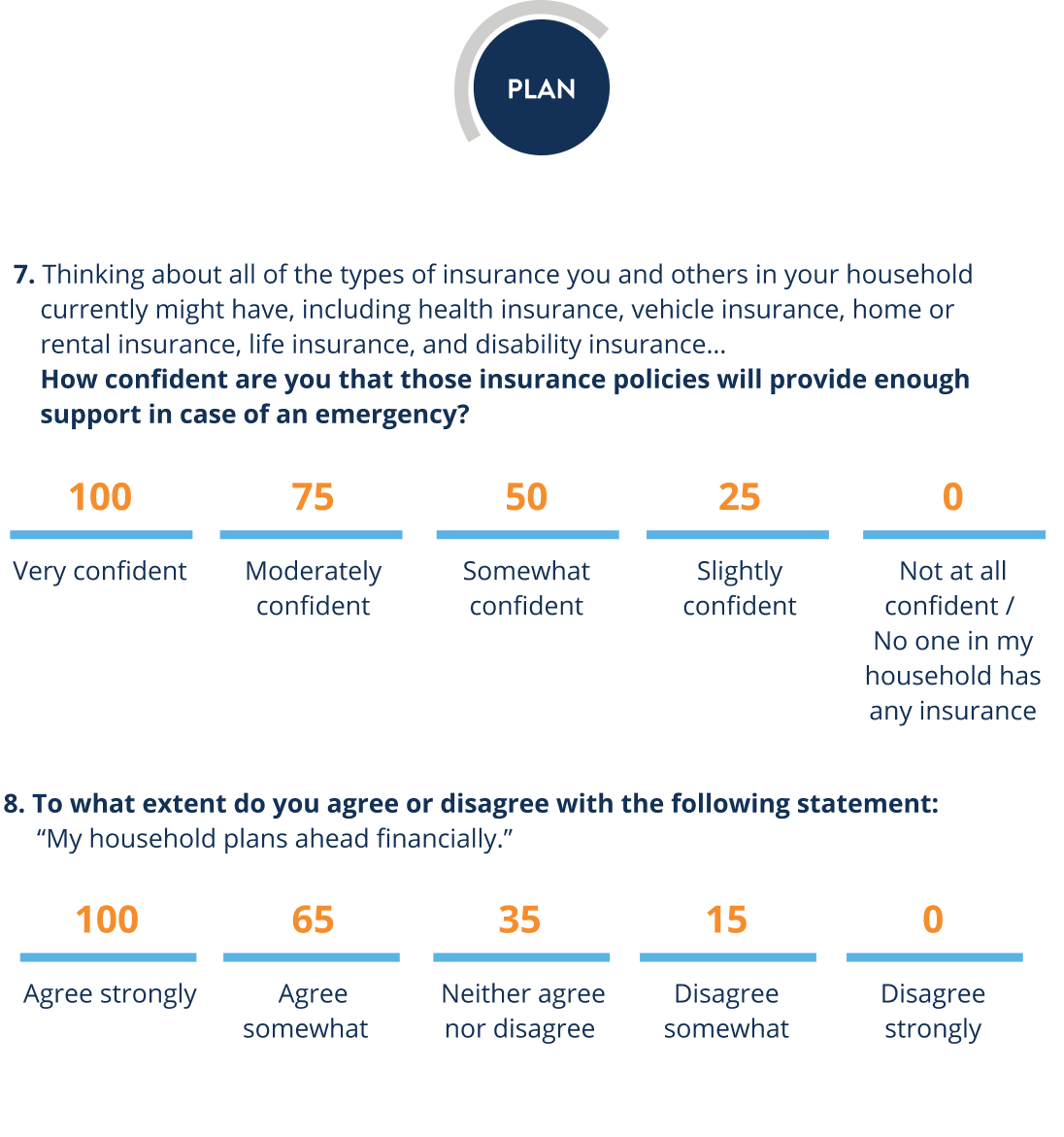 *FinHealth Scores are calculated on an individual-level, but results can be aggregated to understand the financial health of a group of people.

FinHealth Scores and sub-scores can be broken into the following tiers:

To develop the survey questions underlying the FinHealth Score, the Financial Health Network first conducted extensive industry research to identify questions from existing studies that corresponded with the eight indicators of financial health. We considered survey instruments from FINRA’s National Capability Study, the FDIC’s National Survey of Unbanked and Underbanked Households, and the Federal Reserve’s Survey of Consumer Finances and Report on the Economic Well-Being of U.S. Households.

In 2016, we fielded a nationally representative benchmarking study (n = 400) to test the draft survey questions underlying the FinHealth Score framework. We then analyzed response patterns to identify which questions yielded intuitive results and which questions could be clarified and improved.

In 2017, we hired an external research firm to test the revised survey questions with a select group of low-income and financially struggling consumers. The firm conducted in-depth interviews with consumers in San Francisco and Detroit to ensure that respondents accurately interpreted each of the survey questions.

In 2018, we partnered with the University of Southern California to conduct a second round of cognitive testing with members of the nationally representative Understanding America Study panel. The survey questions were simplified and streamlined into the final versions that now comprise the FinHealth Score.

To develop the scoring logic for the FinHealth Score, we conducted a comprehensive scan of scoring tools available at that time. We considered the CFPB’s Financial Well-Being Scale, the University of Wisconsin’s Financial Capability Scale, Momentum’s U.K. Financial Wellness Index, and Bain & Company’s Net Promoter Score (NPS). We also considered proprietary models, such as those available from Melius, HelloWallet, NerdWallet, and USAA. Based on this research, as well as consultations with industry experts, we based our FinHealth Score on an 100-point scale because of its straightforward and intuitive nature.

In 2019, we tested several alternative scoring methodologies in order to assess the rigor and consistency of our FinHealth Score. Using the U.S. Financial Health Pulse dataset, we compared the different methodologies’ distributions, descriptive statistics, and correlations. This analysis was designed to reveal if there were anomalies, biases, or large differences in how the FinHealth Score measures financial health relative to alternative approaches. This work builds on the validation analytics conducted in the U.S. Financial Health Pulse: 2018 Baseline Survey, where we found the FinHealth Score to be highly correlated with the CFPB’s Financial Well-Being Scale (see pages 55-58 in Appendix of the report).

We explored the following alternative methodological approaches for constructing the score:

The FinHealth Score is meant to be a starting point; a proof point that financial health can be measured and ultimately improved. In the coming years, the Financial Health Network will continue to work with industry experts, academics, and network members to test and validate the measurement tool. Through the U.S. Financial Health Pulse, we are also exploring how to augment this tool with financial data. Please direct any questions or feedback about the FinHealth Score to finhealth@finhealthnetwork.org.

Complete the form below to start measuring and improving the financial lives of your customers and employees.