This shouldn’t come as a surprise to most of you reading this post, but it is worth stating: Fintech has a diversity problem.

Specific numbers for diversity in fintech are hard to nail down. But we do know that both technology and finance have a significant lack of racial and gender diversity at leadership levels. Of CEOs at venture-backed tech startups, only 3% are female, fewer than 1% are Black, and fewer than 1% are Hispanic. Numbers are similarly bad in finance: Just 4% of global banks are led by female CEOs, and few executives are racial minorities.

A few months ago, we started asking ourselves what we should be doing about the lack of diversity in fintech in our role as an active participant of the fintech ecosystem. This question is especially poignant for us at Financial Health Network because we support innovation in products designed to improve financial health — particularly for the 57% of Americans that are struggling financially. While women and racial minorities don’t make up the entirety of the financially struggling, their representation among the segment dwarfs their representation among fintech founders. Innovation can come from many sources and we are of the belief that a large and diverse group of people are needed to work on solutions to improve financial health for Americans.

At the time, we were beginning to meet companies for our second cohort of companies for Financial Solutions Lab (FinLab), a $30 million, a five-year initiative managed by the Center for Financial Services Innovation (Financial Health Network) with founding partner JPMorgan Chase that supports early stage innovators that can help improve financial health for Americans.

What follows is built off of an internal paper we developed to help establish our point of view on how we can contribute to improving diversity in the industry through FinLab. While increasing diversity is the right thing to do on its own, we are laying out our thinking on the topic for two primary reasons: First, we want to build on the existing momentum pushing the industry to address its lack of diversity by adding our voices to the conversation. Second, increased diversity in fintech will yield more and better products that can advance our mission of improving consumer financial health in this country.

The big problem can be broken into smaller parts

To help us get our heads around the admittedly intimidating topic, we spent a few months reviewing what others have said on the topic and talking to people in the space. We hosted a brainstorm dinner with startups, moderated a panel discussion during SoFin @ SXSW, and participated in several events and meetings with fintech ecosystem players to discuss the diversity problem. An important component to this problem can be summed up in what a founder recently told us, “The people building financial products just don’t look like the people who need these products.”

The roots of the lack of diversity are not specific to finance or technology. Deeper societal issues — like the gender and race gaps in access to quality STEM education and jobs — are complicated and can seem too difficult for any one organization to make a dent in solving. We see a couple of major root causes that are most relevant to the role we play in fintech — as a funder and supporter of existing products and services — that we can start to address.

Lack of a robust pipeline

Investors often say that there are not enough founders from underrepresented backgrounds “in the pipeline.” Most of these “pipeline” companies come from investors’ networks of other investors, accelerators, universities and ecosystem players.

This is an issue because of the relationship and network-centric nature of venture capital. Nearly every VC will tell you that the best way to get on their radar and begin a conversation about funding opportunities is through an intro from a founder they have funded. Women and minorities are not as in the network. There is something of a negative feedback loop issue here. Finding ways to change that will be critical to solving fintech’s diversity problem.

A lack of representation from women and specific racial groups among VC partners opens the door for selection bias. Venture capital firms with no female partners invest in companies with women CEOs three times less frequently than VC firms with female partners. This is especially problematic because women make up fewer than 10% of partners at VC firms, a ratio that is troubling and unfortunately declining. One analysis of the VC world shows that 2% or fewer of VC partners are Black or Hispanic.

This bias plays out most at the earliest stages, when VCs have less business data to analyze, and are making a judgement call based on the founders. Earlier this year, an article about investor Troy Carter and a Tweetstorm by entrepreneur Matt Joseph brought these issues to life.

Many call this an issue of “pattern matching” or “unconscious bias.” But it is hard to maintain that “unconscious bias” is a tenable position when it is now a commonly known and discussed issue. As tech journalist Kara Swisher often points out, simply acknowledging unconscious bias does not absolve people from the responsibility for failing to act to improve the situation. In this day and age, it’s unacceptable to do nothing.

One small step toward improving diversity in our space is to share data about how we’re doing as an industry. The following stats reflect how FinLab is doing as a program in its second year. Overall we are doing better than industry benchmarks, and saw improvements between our first and second cohort. However, we believe that we can — and should — do better.

We use the term “founder” to refer to anyone with the title of Founder, Co-Founder, CEO, or Executive Director. We use the term underrepresented racial minority to describe individuals who identify as Black, Hispanic or Native American.

It is worth noting, though it is not surprising, that nonprofit applicants have much better gender diversity: Over half of applicants last year and over 60% of applicants this year have at least one female founder, CEO or executive director.

Our selection process involves a team of reviewers who help narrow down the hundreds of applicants to ~15 finalists. A Selection Committee then selects the best nine companies from those finalists.

Our initial selection process included 24 people last year and 32 this year, both from within Financial Health Network and from partner organizations. Both years, over 40% of these reviewers have been women. We had two people in 2015 and four people in 2016 from underrepresented racial minorities reviewing applications.

Overall, we acknowledge the need to include more reviewers from underrepresented racial groups in our selection process, especially at the earliest stages.

Our first and second cohorts each have nine organizations. The first cohort includes three organizations with one or more female founders, and one with a founder from an underrepresented racial minority. The second cohort includes five organizations with one or more female founders, and three companies with founders who identify with an underrepresented race. In both cohorts, the nonprofit organization in the cohort is led by a female CEO. We are encouraged about the increased diversity in our current cohort relative to our previous group of companies. 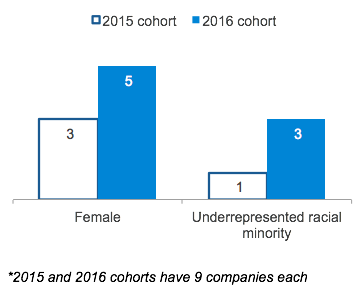 This improvement is meaningful and something we’re proud of. The biggest change in our process from 2015 to 2016 is that we started putting greater focus on founder diversity and seeing ourselves as part of the solution. We spent more time thinking about groups we could leverage to help notify a more diverse group of potential applicants about our program. We spent more time thinking about people who were part of our selection process. Importantly, our criteria for selection into the Lab did not change. We continue to pick organizations based on team, product, and consumer impact.

We also started asking our companies for metrics about their teams. Of the total 80 people — founders and employees — working at the companies of 2016 class of FinLab, 41% are female and 20% are from underrepresented ethnicities. We are excited to see and share these results. But we recognize a need to be more thoughtful in our approach and we are actively thinking about how to encourage our companies to improve these numbers. 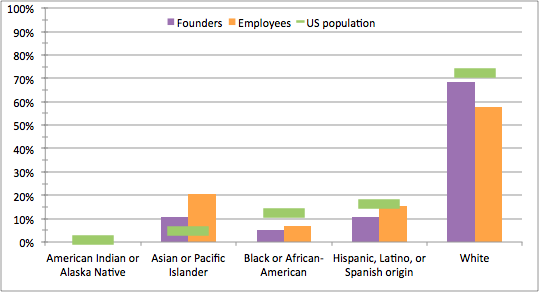 Even, a company in our first cohort, has introduced a number of measures to reduce hiring biases for their entry-level roles, like requiring a demographic-blind survey and an anonymized job simulation, rather than accepting resumes and conducting interviews, which inherently open the door for human-bias. This is a great step.

While our second cohort of companies includes more founders from underrepresented backgrounds, we need to continue improving the diversity of people involved in our selection process. At this point, we are all mindful of the biases that exist, but there’s still no getting around the perspective that is added when we have a more diverse group of people selecting companies. We’ll also continue to explore ideas and solutions for removing bias for processes beyond just selection for our program — like hiring within our companies.

We are also conscious about not only meeting founders through our existing networks. So if you are a founder with a startup helping Americans improve their financial health, reach out. We want to meet you. We are at @TheFinLab. We promise to respond.

This post originally appeared on October 17th, 2016 on Blavity.com. Blavity is a tech company for forward thinking Black millennials pushing the boundaries of culture and the status quo.